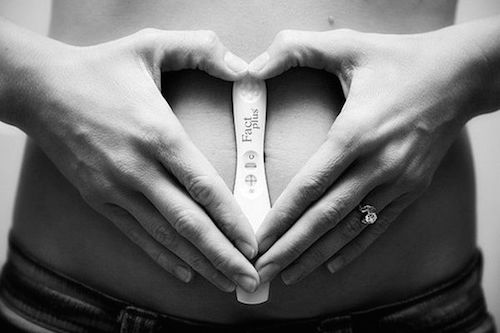 The woman in the pharmacy looked at me like I was insane.  I stood at the counter with six different pregnancy tests spread along the counter and asked, “Which one is the most sensitive?”

She rolled her eyes at me like I was a baby crazed psychopath who was trying to blackmail  my boyfriend into staying with me.

“I dunno, there all the same really.”  Wrong!

They are not all the same…And when you’ve been struggling with APS, or Hughes Syndrome what you want from your pharmacist is an actual fucking answer! 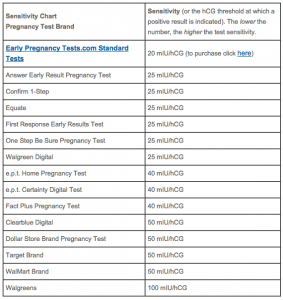 While the price of a pregnancy test many be about the same, they are certainly not made equal.

In the chart below, you can see the parts per millilitre that each pregnancy test can detect.

The lower the number the higher the pregnancy test’s sensitivity.  The difference between the tests were huge.

So Which is the Winner?

The winner in the most sensitive pregnancy test is FIRST RESPONSE.  These guys claim that you can find out 6 days earlier than other tests.  And it’s true.  Their tests are able to read far less of the pregnancy hormone hCG in your urine.

This test gave me a positive pregnancy test so early that even my doctor was surprised.

What does it mean if you have a faint line on a pregnancy test?

Are you pregnant?  Probably.

But the line will not darken until after implantation of the egg into the uterus.  So there is still a possibility that what you are seeing is a fertilised egg that will not implant.

Doctors recommend you don’t take a pregnancy test until you have actually missed your period.  This is to ensure that you don’t get your hopes up about a fertilised egg that doesn’t actually implant.

But if you’re like me, then nothing can stop you from testing.  I tested almost every day after I ovulated.  On the 10th day I saw a very faint line.

If this happens to you then, just keep testing over the following days to watch the line darken.  I would probably hold off until after an implantation bleed or the line is as dark as the control before getting totally excited.  Just a thought.

If you test too early you can get some funky results.  You can get a false negative and a false positive.  For more info about the best pregnancy EARLY PREGNANCY TESTS read here.