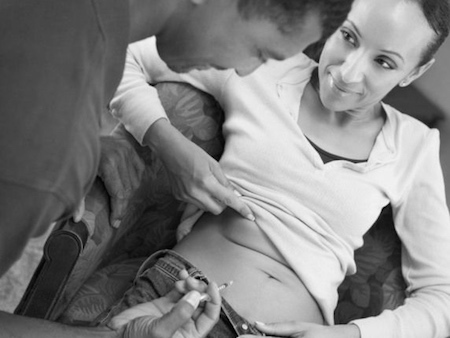 Today I had my first Clexane injection. Â It was strange to watch my partner kneel in front of me and pinch out as much of my belly fat as was discretely necessary. Â It was not how I imagined being pregnant would look or feel like. Â As I lifted up my t-shirt, with the nurse overlooking the whole process I said, â€śThis is not how it looks on Pinterest.â€ť

The needles were sharp and painless. Â But as he compressed the contents of the syringe under my skin I could feel the heat of it burning a little in my muscle. Â After a few minutes, I felt like I had been stung by a bee. Â I had to take my belt off and couldnâ€™t stop rubbing the spot where the needle had gone in.

Enoxaparin is a kind of heparin marketed under the names of Lovenox, Xaparin and Clexane, among others. It is an anticoagulant used to prevent and treat deep vein thrombosis or pulmonary embolism, and recurrent miscarriage. Â It is given as a subcutaneous injection, which is into the fat layer of the belly, in the case of pregnancy. Â The drug comes in a number of pre-packaged syringes that are single use only. Â Your doctor will be able to teach you how to inject yourself properly.

Enoxaparin is not expected to harm an unborn baby as it is believed that Enoxaparin does not cross the placenta. In animal models, there was no evidence of teratogenic effects or fetotoxicity due to enoxaparin. Â The side effects are experienced only by the mother.

These include, obviously, all different types of bleeding. Â Enoxaparin can be used during all stages of pregnancy; however, it should be closely monitored by a physician.

My stomach is still stinging a few hours later after the injection, and if I move about a lot a little blood rises from the prick. Â It wasnâ€™t what I imagined or hoped being pregnant would look like. Â But itâ€™s a small price to pay.

The Most Sensitive Pregnancy Test