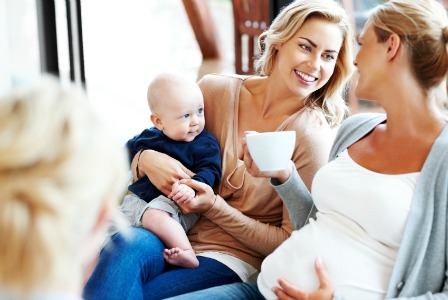 The other day I overheard two friends talking about going to a baby shower.  “It’s just a present grab, they won’t even notice if you come or not.” “Yeah, that’s what I thought, I hate baby showers, they are always so obvious and horrible, let’s not go.” replied the other.

“Yeah, that’s what I thought, I hate baby showers, they are always so obvious and horrible, let’s not go.” replied the other.

I was stunned at what I heard.  Did these two women really believe that their friend was having a baby shower just to make all her friends buy her presents?  It made me so mad to hear people talking like this.  I couldn’t believe how badly these two women had completely missed the whole point.

So what is a baby shower?  A Baby Shower is a somewhat formal occasion to mark the imminent arrival of a new person into a family.  There is usually food, some drinks, light entertainment either baby games (which are awful) or park games if there is space.  People come for a few hours, they bring a present and they congratulate the parents to be, giving them kind wishes and everyone heads home.

But a baby shower is so much more than that! Forget about the baby for a moment and consider this. Something very huge is happening in your friends life, and this is a formal way of supporting them, whether you want children of your own or not.

When big things happen in your friend’s lives, you celebrate them.

A Baby shower marks the beginning of the transition from pregnancy to child.  A baby shower allows people time to appreciate the occasion and come to terms with the abstract idea of a new human coming into the world.

It is the acknowledgement that two people (usually but not limited to a man and a woman) are about to become parents.  It’s about turning up and telling them that you will be there for them, that their life matters to you and that you care about them at all.

It’s the celebration of soon to be grandparents and it is a time for friends. Their lives are changing, everyone’s lives are changing and it’s time to acknowledge that. I mean, it is a really big fucking deal!

And as someone so important in that woman’s life, that you would get an invitation to her baby shower - Shouldn’t you want to give her a present!?

I can’t help thinking about why people dislike baby showers so much. Unless they have recently suffered a miscarriage, baby loss or are struggling with infertility, why would they be so against celebrating their friend’s life?  I can only put it down to jealousy, anxiety about their own life, insecurity or immaturity.

I did not want a traditional baby shower.  My husband and I ended up having friends and family in the park near the beach for a relaxed picnic lunch.  People went for a swim, played cricket, slowly grazed on food and hung our drinking beers in the park. It was perfect.

I did not even think about the presents, I just wanted to see the people who mattered the most to me, before our lives got crazy and I became a disappointing friend.

When I arrived home, I was exhausted but so full of love.  I sat back on the couch, opened all the cards we had been given and begun to read them again.  There was so much love and support in those beautiful hand written notes that I began to cry.  “Everyone thinks we are going to be really good parents,” I called out to my husband.

I was so touched by the day and so glad that I decided to do something to mark the occasion.

And no, I never once thought of it as ‘a present grab’.