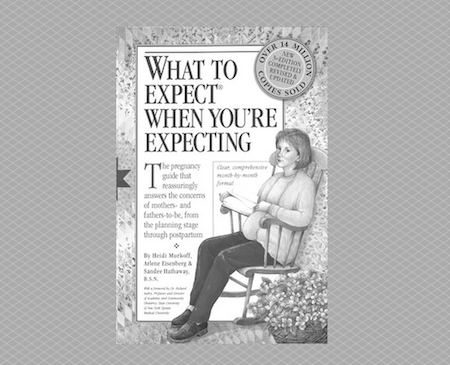 WHAT TO EXPECT WHEN YOU’RE EXPECTING by Heidi Murkoff

Mainstream - Conservative - Western - American Parenting - The first half of this book gets a 9 out of 10.  But by about 25 weeks, you kind of get sick of it.

I bought this book because of how famous it is.  It seems to be the book that every pregnant woman reads. There are more than 14.5 million copies of this book in print at the moment and reports state that more than 90% of all pregnant women will read this book, during their pregnancy.

It is a pregnancy tome.  There is no story to this book, unlike many more personal Pregnancy Guides such as BRINGING UP BEBE.  It’s more like an informative text.  Broken down into weeks and months of the pregnancy. 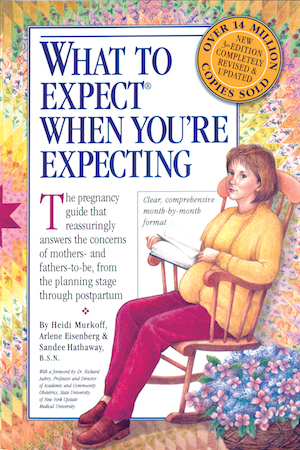 I really loved reading this book at the start of my pregnancy.  I felt like I was learning so much about pregnancy and really ‘doing it right’. Including my opinion, parts that I liked and skipped over all that stuff.

The thing is, once you have ben doing a new job for 6 months (and pregnancy is like a new job) you kind of find your own pace.

I read ahead to about 26 weeks and then closed the book and didn’t touch it again.

I wouldn’t say there is fear in this book, but a lot of the problems, symptoms, complications and issues outlined in the book are unnecessary, and cause more anxiety than they’re worth.

Every important problem that was relevant to me personally was already discussed with me by my GP.  exercise, constipation, stretchmarks and hormone roller coasters  were better talked out in person than read about in a pregnancy book.

All the other symptoms just freaked me out.  It’s a big book of ‘what if’s” The thing is that the likelihood of all those problems is very small.

Like when my doctor told me to get off Google - there is an element of wanted to call out, ‘put it down,’ to women I see reading this book.

Be careful which edition you end up reading, as some copies are as old as 1986 and very much out of date. WHAT TO EXPECT WHEN YOU’RE EXPECTING very American.  While I got a copy of the ‘Australian’ version of this book, it’s approach to women, pregnancy and birth is very middle class, white American.

Heidi Murkoff is now one of the most influential pregnancy writers in the world.  As the author of the What to Expect series of pregnancy and parenting books, she is also the creator of WhatToExpect.com and the WhatToExpect app and the What to Expect Foundation, a nonprofit organization dedicated to helping underserved families expect healthy pregnancies, safe deliveries, and healthy, happy babies.

WHAT TO EXPECT WHEN YOU’RE EXPECTING was originally published in 1986, it has been updated 4 times - with the most recent edition coming out in 2008.  There are now 14 other spin-off books from THE TODDLER YEARS to the BABYSITTERS GUIDE BOOK.

This book is kind of like a right of passage now for pregnant ladies, just don’t take it all too seriously - and don’t read it too closely.  Your better off talking to family, friends and your GP.